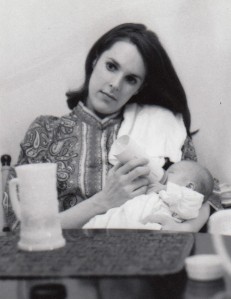 Happy Mother’s Day! This will all sound irrelevant, but stick with me…I usually have a point. I love the Greco-Roman myth of Orpheus and Eurydice. For those of you unfamiliar with the tale, here’s a very brief recap: Orpheus was a beautiful musician, so beautiful that he was the favorite of the gods. He loved, and married, Eurydice. On their wedding day, Eurydice was tragically bitten by a snake and died. Because of his talent, the gods allowed Orpheus to go to the Underworld to retrieve his love, under one condition: he must not turn around and look at her as they ascended from the depths. He went to get her, but as he reached the Earth’s surface, he turned to help Eurydice into the land of the living, and she tragically fell back into the Underworld calling out her love for Orpheus. Bummer.

The backward glance that Orpheus makes has and is an image of great analysis. Orpheus’s backward glance was inevitable; that’s what humans do, they turn around to help the one they love emerge. Orpheus couldn’t be successful because humans don’t come back from death. But I’m so taken with this story because I love that moment of the backward glance: the checking; the love; the concern; the glimpse to make sure that your love is there; and ultimately, the loss. We are helpless. So I like to think of the myth of Orpheus as an acceptance of impermanence. No matter what our talents, intensity of love, or fervency, we cannot stop life from taking its course.

Ten years ago this June, I left my mother. To be more specific, I wanted to marry Robert, and move to California, which meant leaving the East Coast and my family. One of the first papers I was asked to write when I entered graduate school was about Orpheus, and I needed to reflect on the myth and its application to my life. I found the paper the other day. One of the topics I had been asked to address was a time when I felt like an “orphan”, a word derived from “Orpheus.” But I really think this excerpt is more about the backward glance.

The reference to Rilke is from his poem “Orpheus. Eurydice. Hermes.” The other references are to the writings of the professor for my class, because I’m not stupid. (I got an A+.) Also, the Perlman reference is from Michael Perlman’s Hiroshima Forever: The Ecology of Learning. Great book…highly recommend it also.

Here’s the excerpt from my paper: (totally out of context)

…Our soul allows for mourning, which is important on both collective and personal levels. We may well learn psychological commemoration by looking into our own psyches for its place. Perlman writes that “the art of memory at times takes us into an in-between realm, where one experiences the moon-like – part immortal and part mortal—quality of the psyche. It is in this realm…that the art of memory finds its place” (47). In this moon-space where the Orphan looks for direction is where mourning and memory can coexist and then surface to help an individual navigate the abyss with soul in mind.

In July 2004 I stood on a rather remote mountain road in a parking lot in front of Polly’s Pancake Parlor in Sugar Hill, NH. I was facing my mother, and we were saying goodbye.

I was leaving a career, friends, a proximity to family, a birthplace, a history—the very best of which I would always have very close, not just in memories but in my books and my computer and my telephone and most of all in my very skin. I had already, years before, learned the difference between the geography of the country and the geography of my heart.

My mother and I had decided that when it was time for me to go we’d all head up to where I had spent my childhood summer vacations. Somehow it would help having this blurring of past and present as the location for departure.

So there we stood, tensely pushing out the “call-so-I-know-you’re-safe” and the “don’t-forget-to-mail-your-address-change-to-social-security.” My mother’s husband slipped away respectfully and went back into the restaurant, unable to play a role in a goodbye in whose making he had no part. My future husband retreated to the car to escape what he would later call “the palpable emotion of the moment.” Nothing can be said or done in such a moment to convey about what will happen next. So my mother and I went ear to ear; nose to neck; entangled; disengaged; hiccuped “bye,” and parted.

I got in the car and barked out “Go!” as if I had just robbed a bank. Who knows—maybe I had? I have only made withdrawals from a mother’s love account, and do not yet know fully from where the deposits come. I felt like I was taking something away from her, and yet she was gladly giving it.

I shifted in my seat, and my husband said, “Don’t look back; you’ll just make yourself crazy.”

But I cheated. I peeked into the rear-view mirror and caught my mother not soulfully staring after the car, but doing a run-walk back into the restaurant to find her husband… And that was the moment I felt like an orphan.

This is an excerpt from my personal account of a moment when I myself was the Orphan, balanced between two worlds, equally perilous in their limitations to my soul being whole. As Romanyshyn writes, I was “between a home, which is a heritage, and one that beckons as a destiny” (Ways of the Heart 41). My glance back revealed Rilke’s Eurydice in the form of my mother, already gone, “already loosened like long hair, poured out like fallen rain, shared like a limitless supply. She was already rooted” (Rilke 53).But, as Romanyshyn points out, “the backward glance is instruction in the art of holding on and letting go” (151). 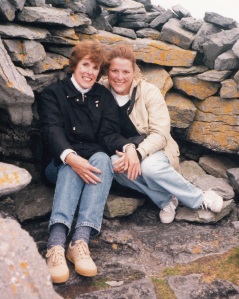 In Ireland together…just us!

So this is what I want to say for Mother’s Day: my mother will always be a part of me that is irretrievably hopeful, joyful, and beautiful. I will always wish I could have been more for her, and grateful for the happiness I have brought her. And for forever, I will remember that moment on a mountain in New Hampshire, when I said with my actions that I was ready, that I believed, and that my backward glance was to watch the falling away of my childhood, and my reliance on her to show me how to be a woman.

3 thoughts on “Orpheus….and my Mama”